Me an Skip submit to Domination.

So we played our first of the I95 domination games aptly titled "Domination" on monday night. The premise being slightly different to a standard mission. Your game is now fought over more than the usual objectives.  The objectives are placed on table by a third party, each obj is rated in points ranging from 1 to no more than 5 and for a total of 12 points in all. The obj are taken by standard method, in the mission we played once taken they could be left but remain in the victors possesion until captured by the opposition.  But different rules apply to different missions.
In ours the mission was simple... take 8 points on or after turn 4 and the game is yours, failing standard parameters,  company morale failure or total destruction.
Skip was taking jerry and I was taking the aussies (borrowed from a pal), at this point I realised I needed something mobile, and as it turned out I should have taken more. Hey hindsights a beautiful thing.
So, to my plan, with ten platoons in comparison to skips 8, I was gonna see his panzers before he'd see my 25 pdrs (MW game), this mission is just like free for all accept you're much closer and depending on obj placement you have to engage and quickly, which is how we like it! So as the polite fellows we are, we thought we'd oblige. As it panned out my UC's held off an advance by probing jerry recon on my left flank (1pt obj) and if they'd driven round have faced 3-4 25 pdrs, the bofors AA did the same on the right (2pt obj) with a short vickers platoon in support. The Matildas and 1st platoon advanced with 25's in support on the next 3 pointer in skips half, mine was already safe (straddled by 2nd & 3rd platoon either side), ha! Skip pushed up into town, his pioneers moving up through the wadi supported by panzers, recon and 10.5's. 3rd platoon thought they'd have summa that so off they headed, however the dice gods thought different as I failed several infantry saves on the way in, but hey the proverbial happens, so toe to toe time, once again the dice gods ignored me or thought they'd twist my melon. See the pic below for two separate rounds of assault dice. So that was 3rd platoon gone. 1st platoon and the tildas made their way onto the 3 pointer, although I waved goodbye to the brits. 2nd platoon dissappeared along with a UC platoon in a similarly spectacular way to 3rd platoon, they were turned back by 7 out of 8 4+'s and more rare infantry saves. And then decided that they no longer wanted to stay in the fight and take the c.o. along with them. Skip made my vickers pay for moving out into the open. Time wasn't on our side, but the game was over, it was and could only be skips. If skip hadn't failed some earlier firepower tests, would I have made it to that 3 pointer? The game was a blast, I love the 25pdrs along with the british rules for them, I'm glad to see my FV troops performing to the best of my opositions ability, but like the Murphys... Loved the mission and it panned out as we expected, a nice fist fight in the middle. Here's to the next domination game.

See the below link to the I95 domination PDF. 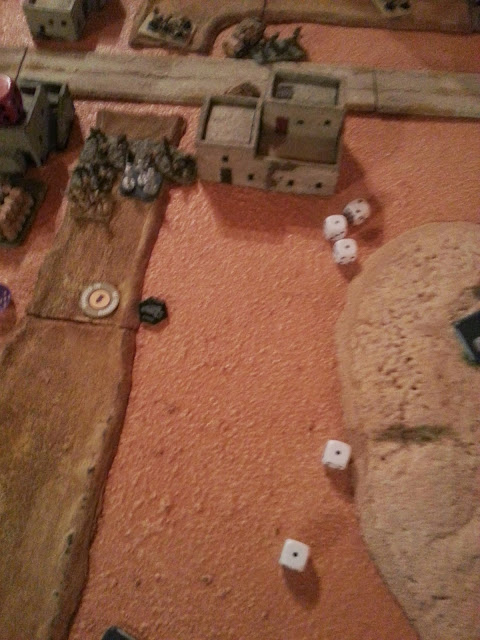